THE STORY OF PELINDABA

Just 40 minutes outside the capital city of Pretoria, Pelindaba showcases a uniquely African marriage of heritage, nature, and technology.

NTP has the rare distinction of being housed in the heart of a nature reserve, with its headquarters at the beautiful Pelindaba complex near the Hartbeespoort Dam in the North West province of South Africa.

The site, which used to be a portion of a farm owned by renowned Afrikaans academic and writer Gustav Preller, was also the occasional retreat of famous naturalist poet and writer Eugene Marais, who was a family friend of the Prellers.

In the late 1950s Pelindaba was selected as the home of South Africa’s nuclear technology programme, and is now owned and operated by the South African Nuclear Energy Commission (Necsa). Many of the distinctive concrete buildings at Pelindaba (including the SAFARI-1 reactor building) date back to this time, and were designed by Pretoria-based architect Brian Sandrock. 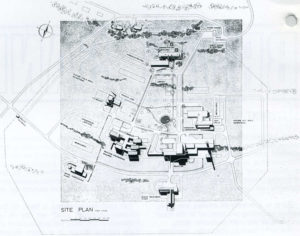 Architect’s site plan for Pelindaba, May 1969

According to the South African Heritage Resources Agency, SAHRA, the name Pelindaba was derived from the isiZulu expression “phelile indaba”, meaning “end of discussion” or “we will not talk about this anymore”, which was apparently uttered by an elderly farm labourer after plans were abandoned to develop a township on the farmland in the 1920s. After 1969, the very same phrase was adapted to name the apartheid government’s top-secret uranium enrichment plant – Y-Plant, also known as Valindaba or “we don’t talk about this at all.” The enrichment plants were decommissioned, decontaminated and dismantled following South Africa’s signing of the nuclear non-proliferation treaty in 1991.

Visiting Pelindaba:
The general Pelindaba complex is not open to members of the public, however Necsa operates a Visitor’s Centre that can be found at Necsa Gate 1 on the R104. Admission to the centre is free of charge, and school groups are welcome (by arrangement).

You can view a route map to to Necsa here.